MQTT is a protocol that specifically sends data from devices of the Internet of Things and is supported by most microcontrollers and systems. To use Raspberry Pi MQTT communication, not much is needed, which is why this type of transmission is very interesting. In addition, it is really easy to use.

In this tutorial, we install a Raspberry Pi MQTT broker, whereupon we receive and send data. We can either use several Raspberry Pi’s for testing or just use a single device.

This tutorial works without much additional hardware. However, you either have to have at least one Raspberry Pi 3 (alternatively a Model Zero W) or connect a wifi stick to your Raspberry Pi to use MQTT.

Other devices such as an ESP8266 can also communicate using MQTT. This is possible with Raspberry Pi’s as well as other devices. Also for the NodeMCU there are ready-made packages.

Some may wonder what MQTT should be. To quote the official MQTT page:

MQTT is a machine-to-machine (M2M)/”Internet of Things” connectivity protocol. It was designed as an extremely lightweight publish/subscribe messaging transport. It is useful for connections with remote locations where a small code footprint is required and/or network bandwidth is at a premium.

It is therefore a standardized network protocol with which short messages / commands can be transmitted. The big advantage is that the built-in wifi adapters (for example in the Raspberry Pi or in the ESP8266) are used for the internet connection. More accessories and complicated wiring is not necessary! This makes it possible to send the data via the local network or the Internet.

In detail, the transfer consists of three different components: 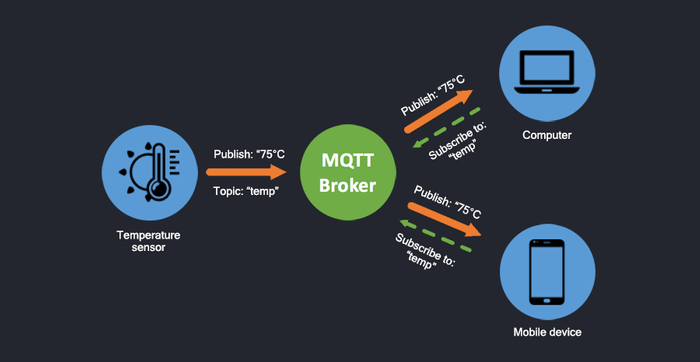 After installation, a Mosquitto server is started automatically. We open a subscriber in the channel “test_channel” waiting for messages:

The channel is here like a frequency, on which one hears. For example, different data may be sent in different channels (e.g., temperature, humidity, brightness, etc.).

Otherwise you have to specify the internal IP address (eg 192.168.1.5) of the recipient instead of “localhost”. On the receiver side, the message should appear soforn.

The communication is super easy, as we have seen. In order for us to be able to use the whole thing from scripts, we want to make it available to Python. For this purpose, we first install a library via the Python package manager (for Python3 also use pip3):

Alternatively (for example, if the package could not be properly installed) you can also install it manually:

We start with the receiver. For this we create a new file with the content:

After saving and closing (CTRL + O, CTRL + X) we execute the file:

Either you send a command as usual by Shell Command, or we also create a Python Sender / Publisher.

The publisher’s code looks like this (create a new file and then run it, keeping in mind the correct IP address):

That’s it! Now you can include the appropriate parts in your scripts and receive or send MQTT messages from other Raspberry Pi’s. Of course, this is not just limited to Raspberry Pi’s because the messages can also come from or be addressed to other devices.